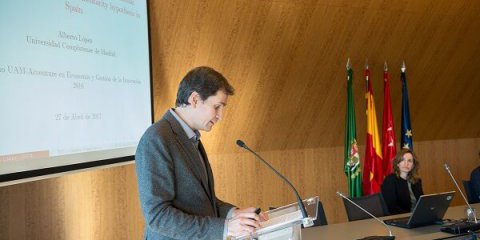 The jury for the UAM-Accenture Award 2016 was composed by:

Among the papers presented, which had been sent to the jury without name or affiliation of their authors, the following three were finalists:

Finally, the jury chose by majority the paper:

“Productivity effects of ICTs and organizational change: A test of the complementary hypothesis in Spain”, by Dr. Alberto López Sebastíán, Department of Fundamentals of Economic Analysis, Universidad Complutense de Madrid.

The ceremony of the VIII Research Award (“Digital Revolution, Economy and Employment”, 2016) of the UAM-Accenture Chair in Economics and Management of Innovation took place on April 27th, 2017. The event, which was held at UAM, was chaired by the UAM´s Rector, José María Sanz, and attended by José M. Lasalle, Secretary of State for the Information Society and Digital Agenda; Juan Pedro Moreno, President of the Chair and President of Accenture Spain; Ana M. López, Dean of the Faculty of Economics and Business Administration; Prof. Paloma Sánchez, Director of the Chair and Professor of Applied Economics at the UAM; and Prof. Alberto López Sebastián, the awardee.

Juan Pedro Moreno then spoke about the importance of the changes that ICTs are generating and the positive effect of ICTs on the economy and employment.

After that, José M. Lasalle, intervened emphasizing the impact that new technologies are having on society. He highlighted the emergence of a new social class, the digital class, in front of other traditional classes. Then, citing the work of Richard Florida, he pointed out the importance of the so-called 3 Ts (technology, talent and tolerance) in shaping the future society.

The event was closed with a cocktail.

IX Award of the UAM-Accenture Chair 2017: “The next generation of science and innovation policy: adapting the policy mix to foster open innovation and digitalization”.
29 June, 2018
Search
Recent Articles
Our gallery
Go to Top